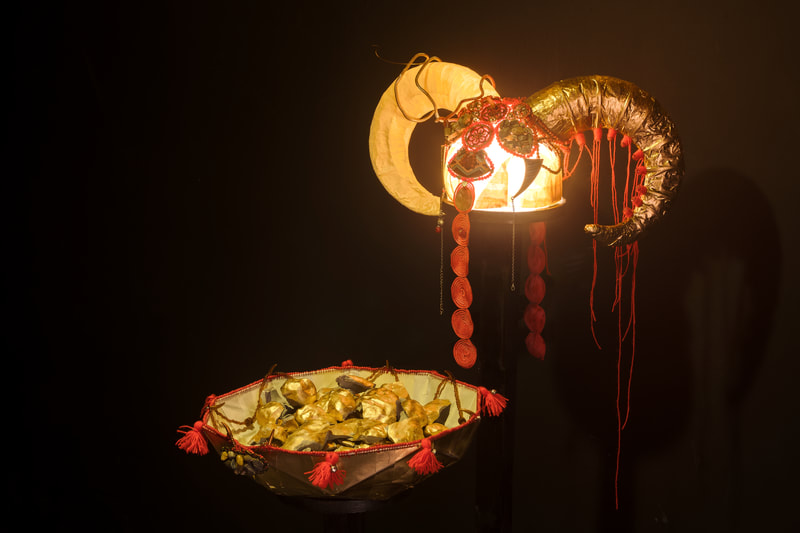 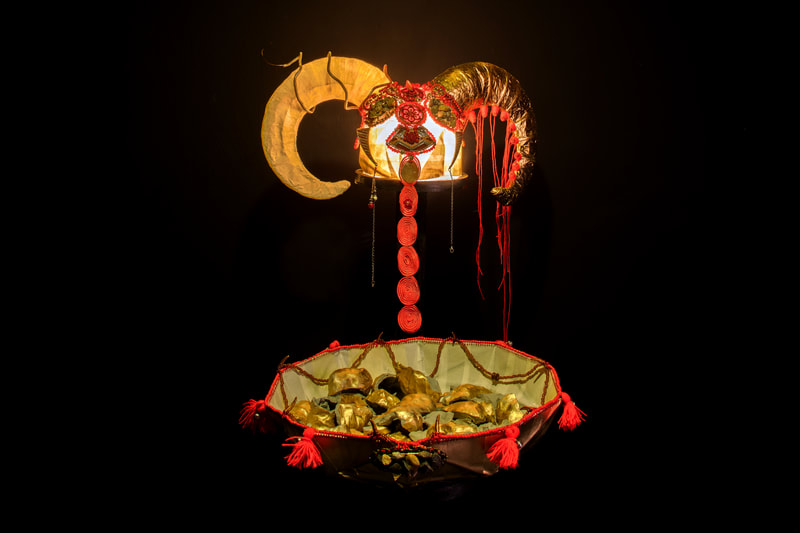 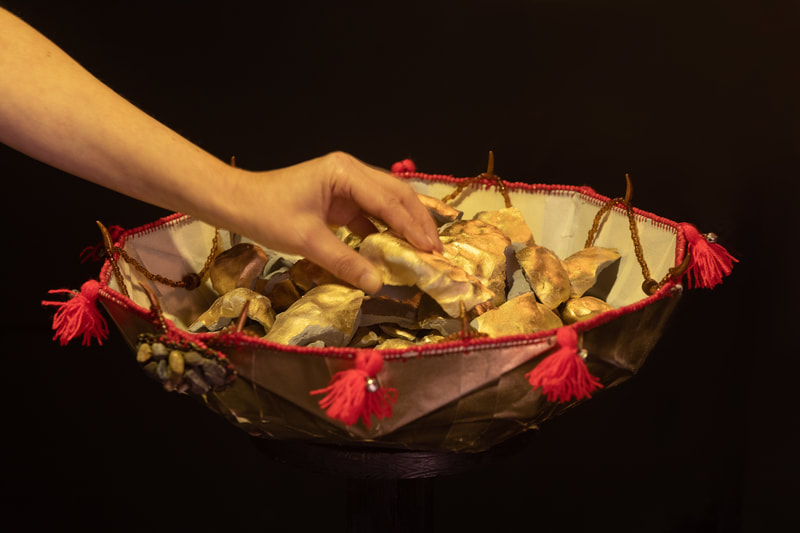 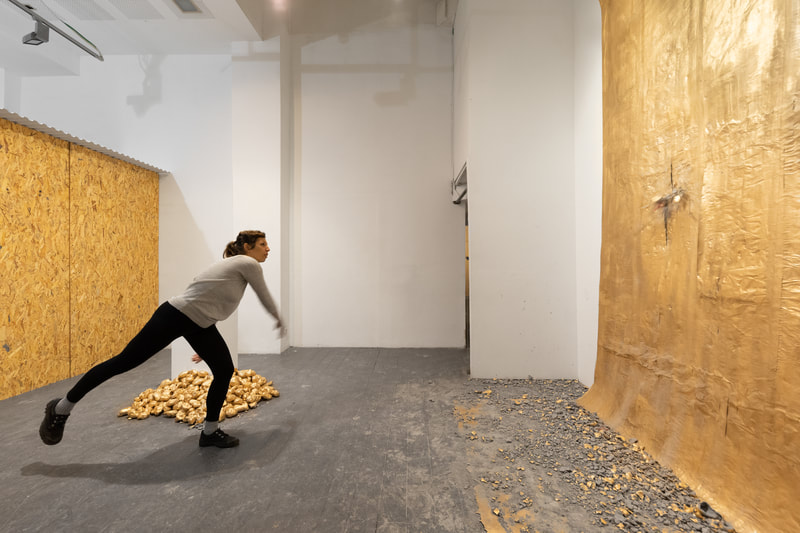 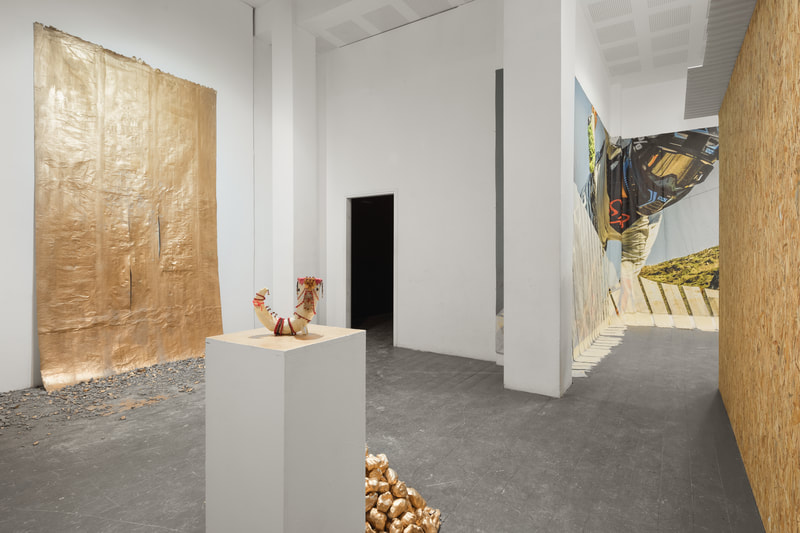 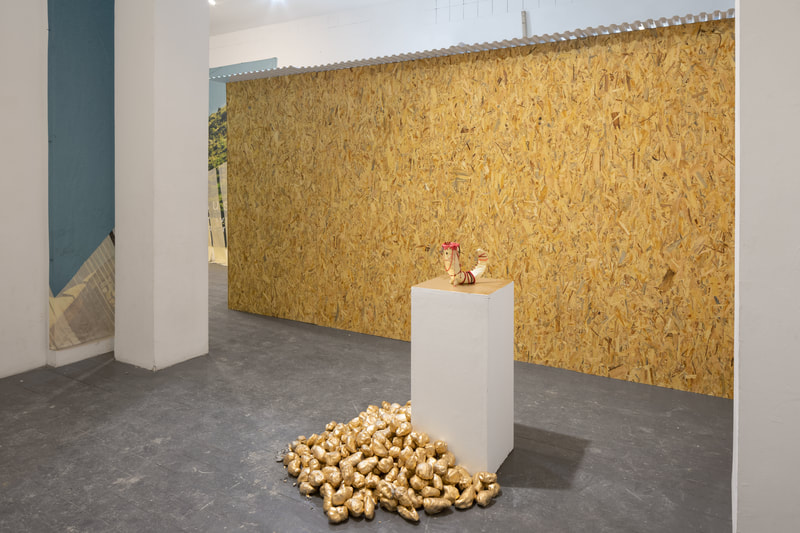 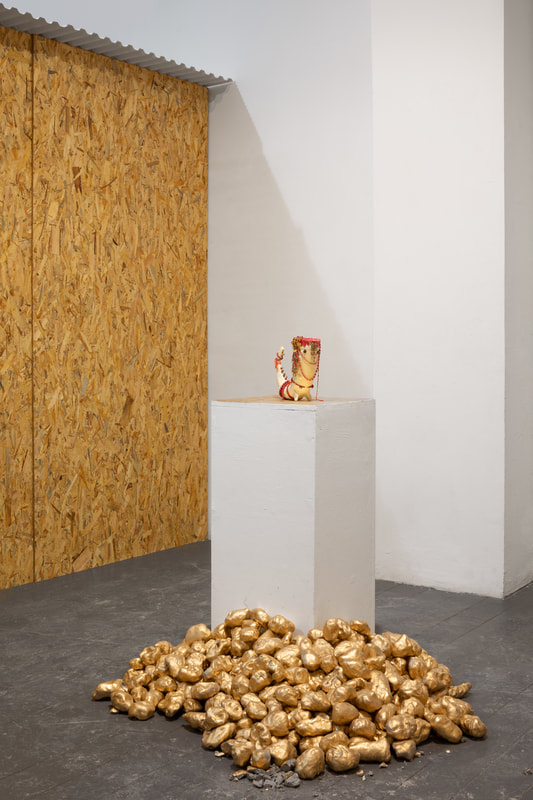 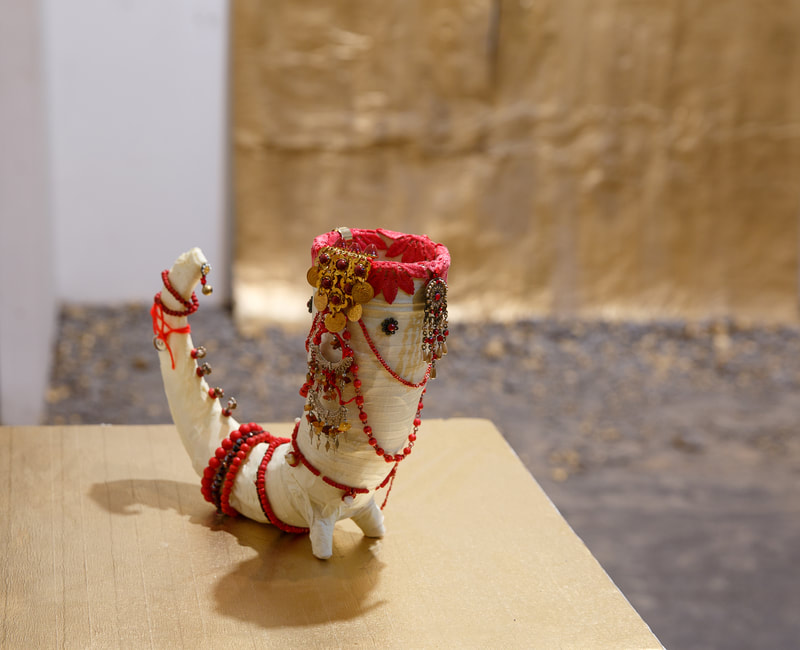 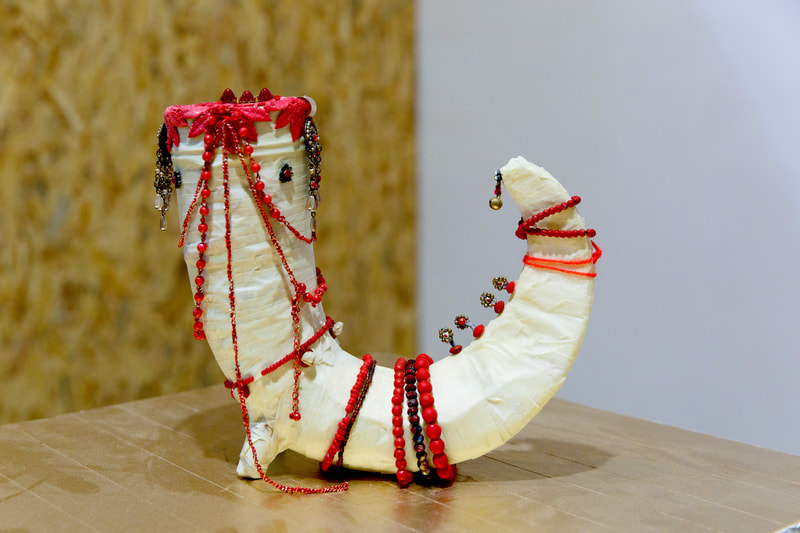 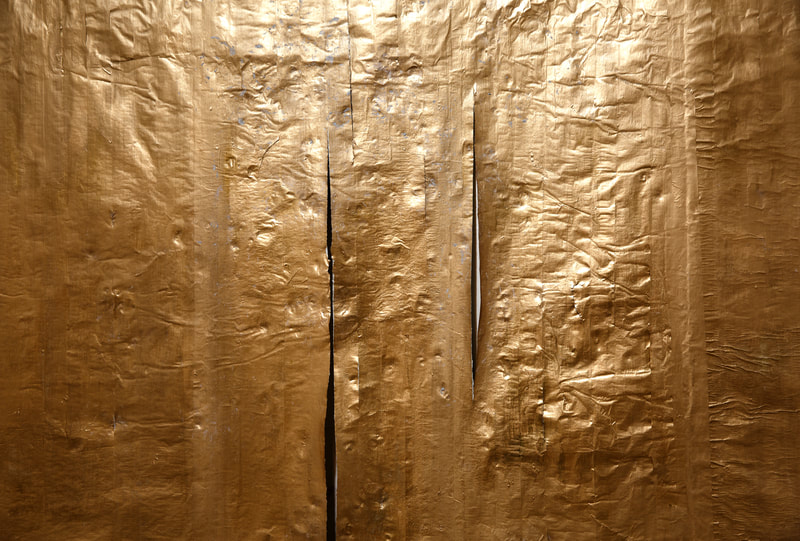 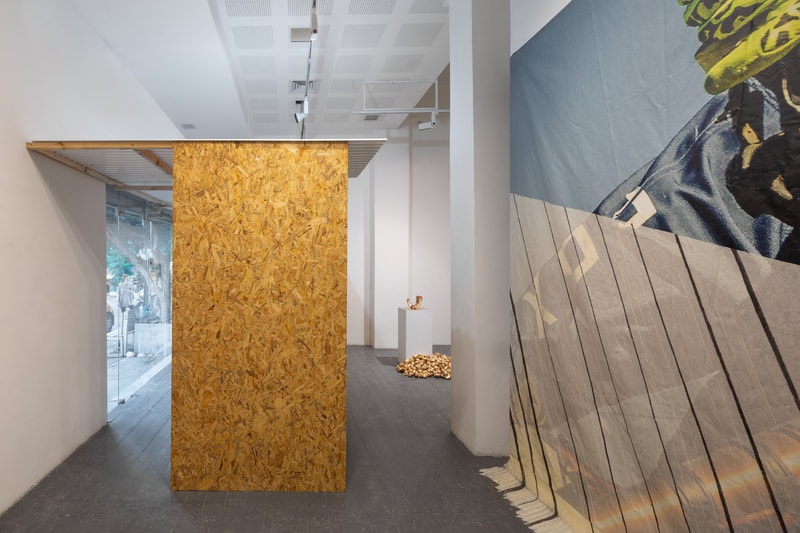 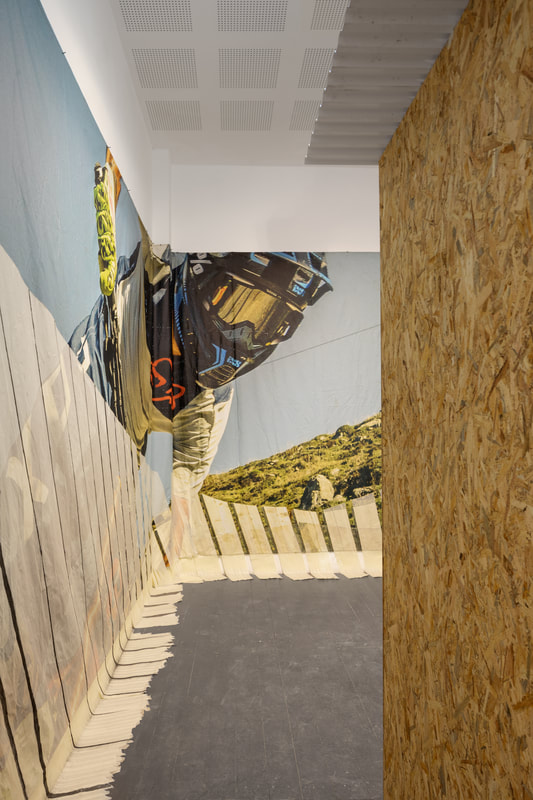 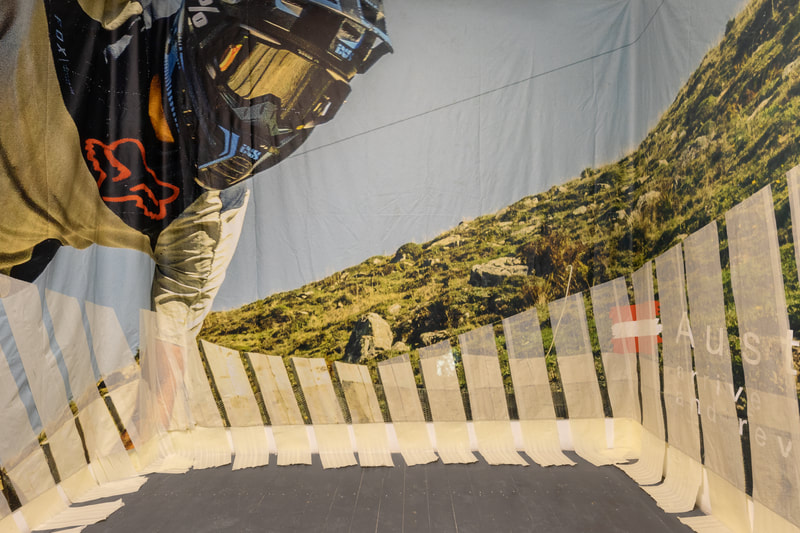 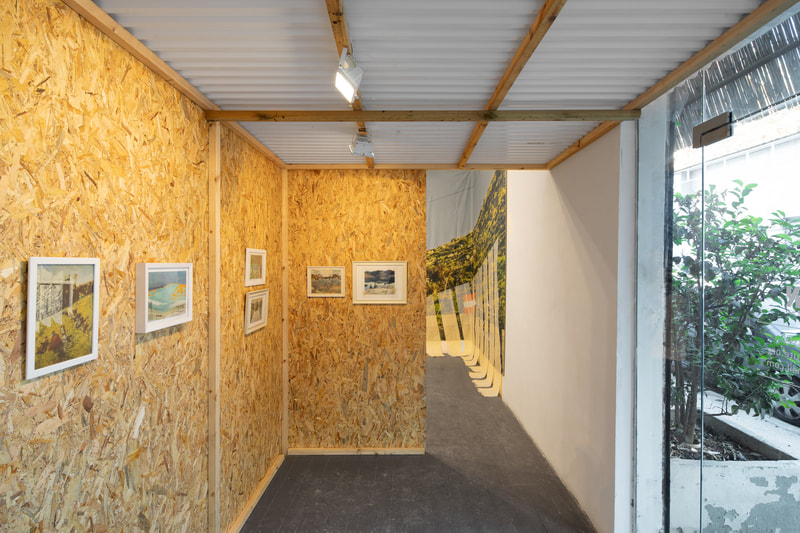 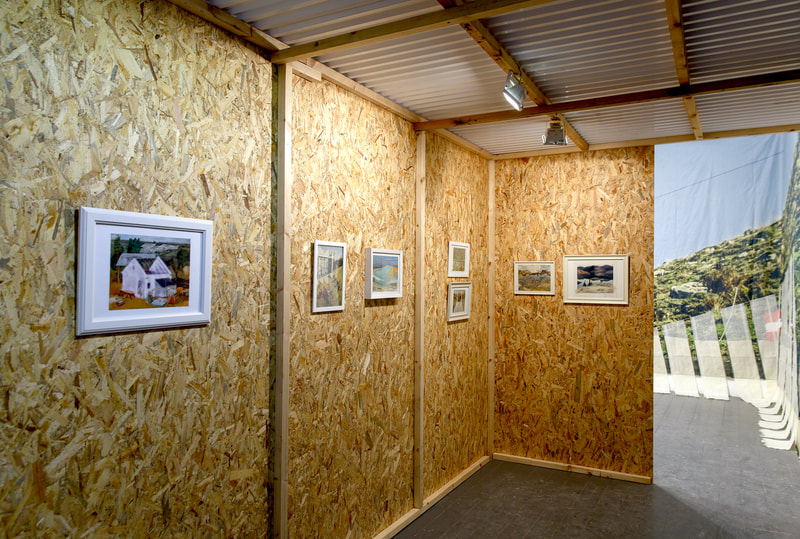 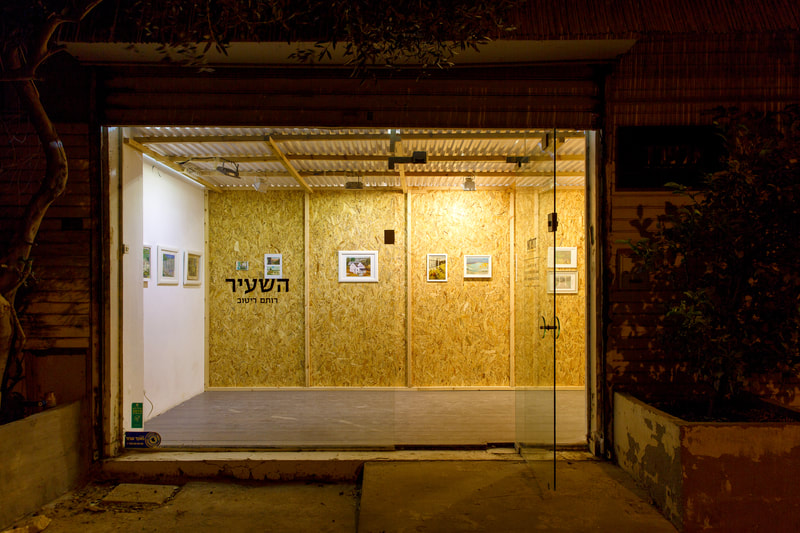 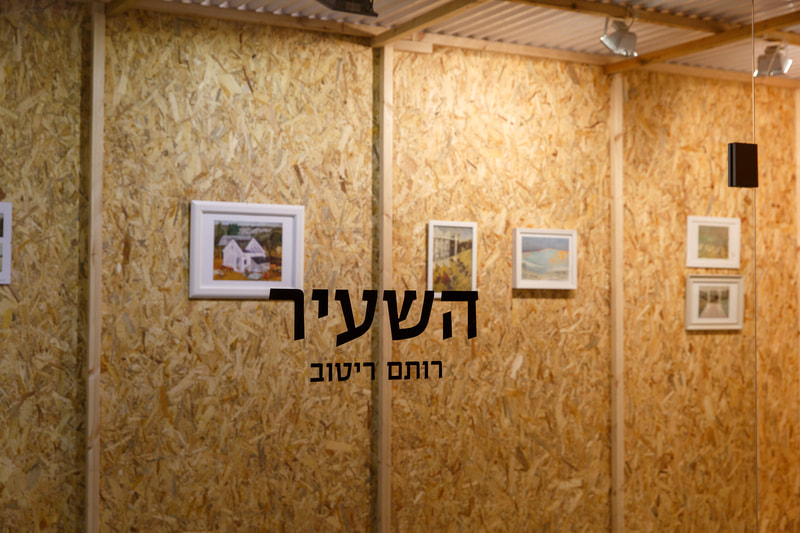 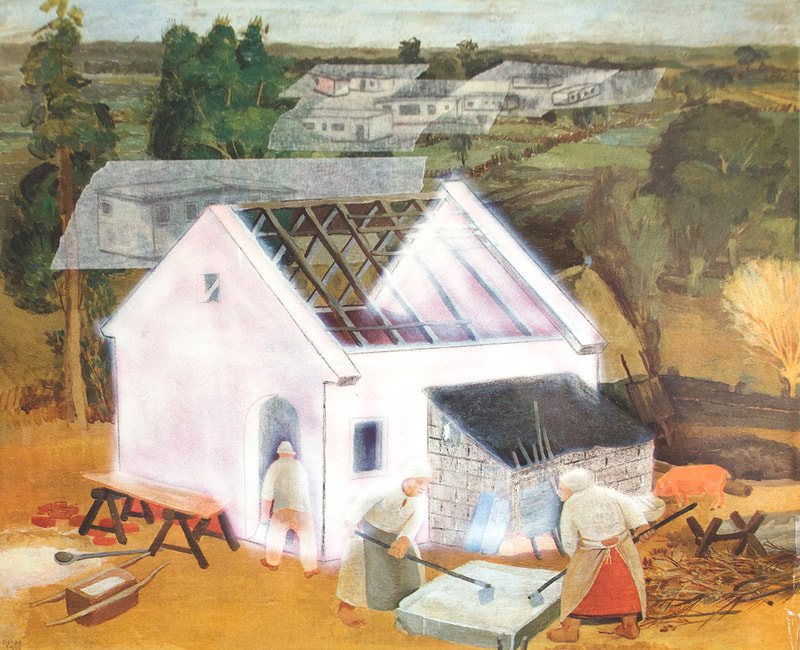 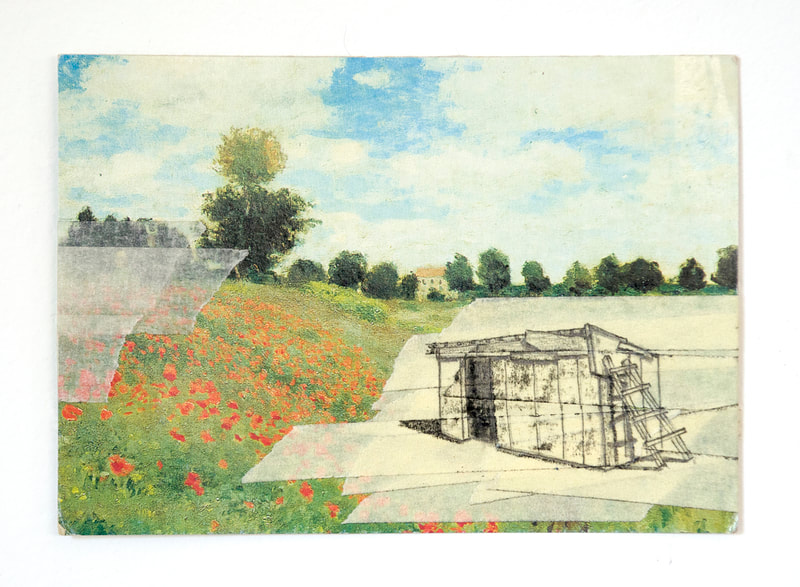 Redemption of the Poppy Field near Argenteuil by Claude Monet (1873). Charcoal and Masking tape, 2018 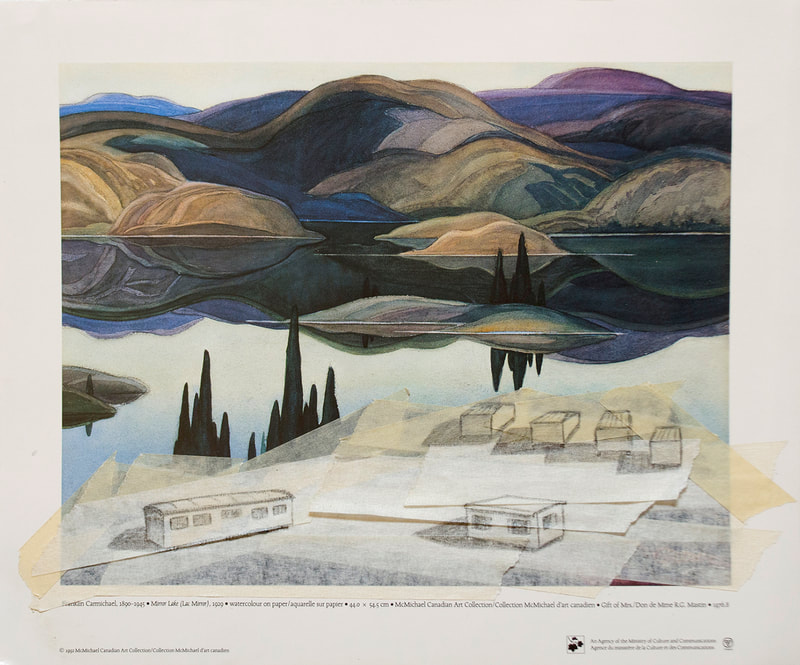 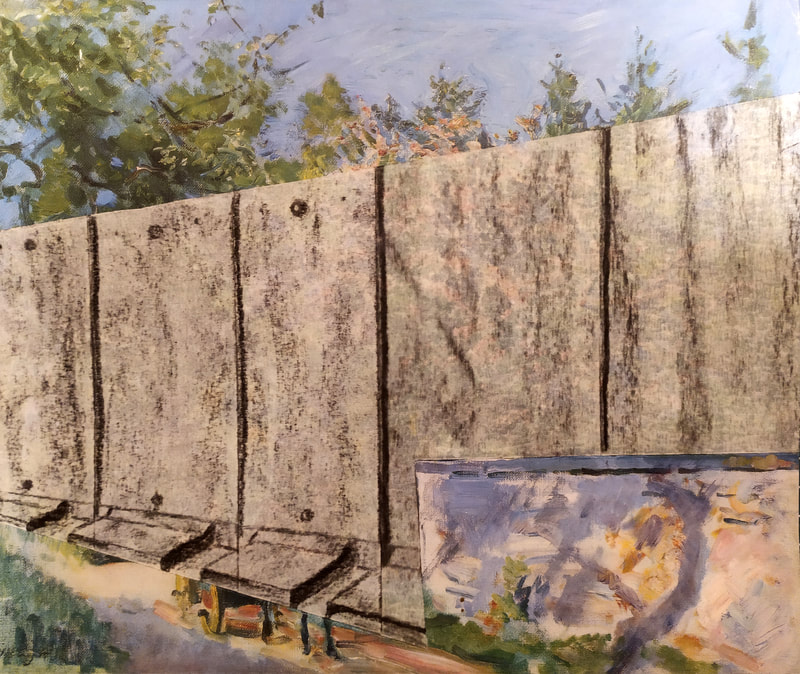 Redemption of Hawthorn with small cart by Max Slevogt (1918). Charcoal and Masking Tape, 2018 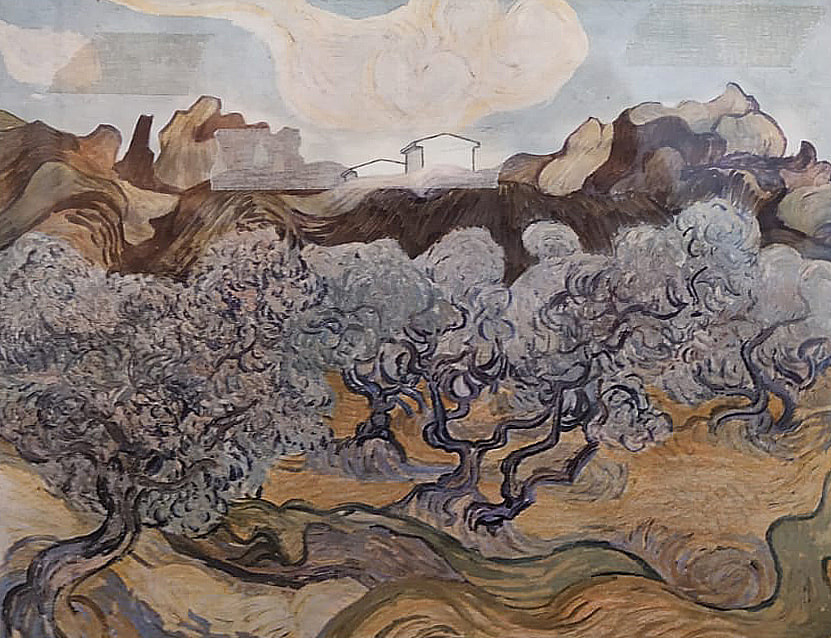 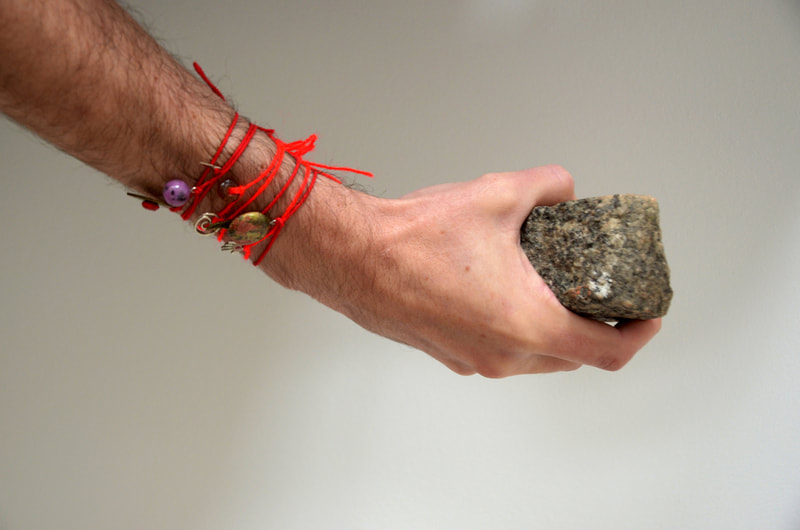 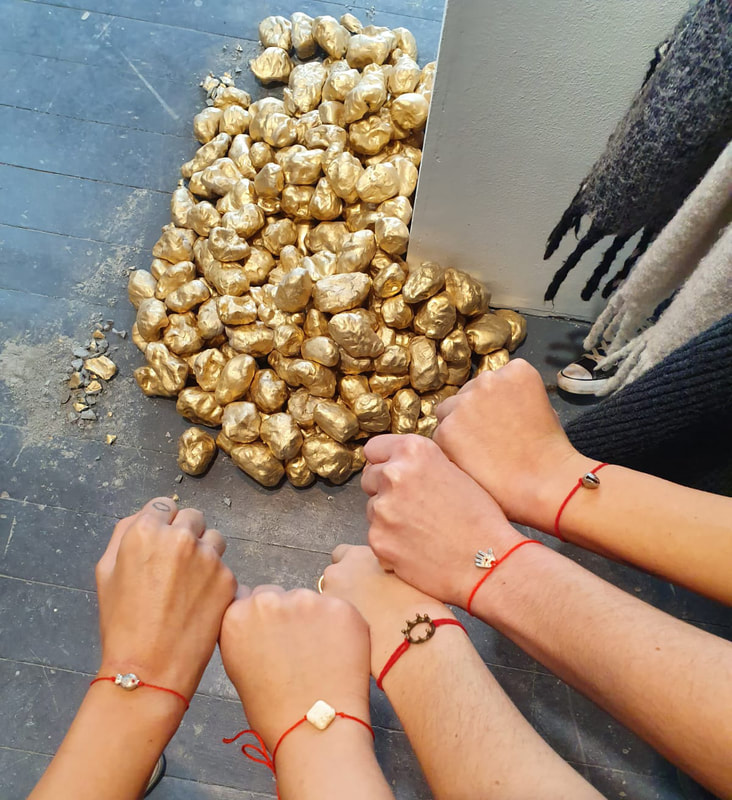 “Ha-Sair” echoes local Israeli history, cultur, religions, traditions and their manifestations in the history of art. "Ha-Sair" installation is constructed of four ares, creating together an interactive cult lane, represented with the use of elements, symbols, materials, objects and their specific placement in the installation: a mask in the spirit of Biblical time, an outpost (an illegal settlement) drawing on a landscape painting by Claude Monet, an outpost hut similar to those at Binyamin Mountains, an offering-bowl in a Bedouin style. All are part of a fictional worship called “Ha-Sair”, representing the essence of the ritual which is the center of the exhibition. In order to receive a blessing one must participate: to give a charity to the foundation horn, to throw and smash a clay stone on the golden wall and to leave an offering for "Ha-Sair" mask.

I am fascinated with revealing the essence of ideas such as: surroundings and territory; locality; identity; images and symbols and their enduring effects in both public and social spheres. I examine the ties between, and implications of, past events on the present moment. All of these contribute to the building blocks of my creative expression.

Rituals and cults are imminent actions connecting individuals to communities. Within this are the actions of ‘sacrificing’ or ‘to give sacrifices’ – actions at the core of relations between the paradoxical: ‘man and God’, ‘humans and Earth’; and ‘nations and visions’. “Ha-Sair” represents the essence of "Sair La-Azazel" (scapegoat) : sacrificial offering and victim (as well as ‘Martyr and Shahid’) which are key terms for strengthening national or religious ethos. Worshiping the ‘need for sacrifices’ involves violence and in turn produces violence. The demand to proudly accept the chance of either being, or giving a personal sacrifice is part of the Israeli ethos, as it was built upon repeatedly throughout history in various configurations. It is profoundly present, as is the connection between the citizen and the state.

In my works I incorporate inspiration from the history of art. More specifically I do this by using; perceptions, images, representations, legends, folklore, and myths and traditions that are rooted in the history of Israel, Judaism and other religions and nations at the geographical region of Israel (Syria-Palestine as named by Roman emperor Hadrian after the “Bar Kokhba” revolt). Current events are points on the historical sequence timeline, continuing everything that was here before us.

The Cult lane
Space #1
The entrance to the exhibition passes through a reconstructed wooden hut: a temporary hut which was built at the occupied-territories in early 2000s, as part of the settlement at the illegal outpost "Megeron”. This temporary wooden hut is the refining-point of all the exhibition’s ideas and constitutes the first action of "Ha-Sair" cult. The hut is a formalist representation of “Greater Israel” vision realization, the promised land and the redemption of the land. It symbolizes the connection between earth and god. It is the embodiment of the ancient blood circle of the theological and geographical territory (The “Settlement Enterprise” = The settlement period during Joshua's Days).
“Redemption" is a drawing series of settlements and “The Separation Wall” drawn on landscape paintings reproductions of works from the end of the 19th century to the beginning of the 20th century, such as: Van Gogh, Mona, Gauguin, Mondrian and others. In the act of planting the settlements in the painted landscapes, I appropriate, and associate them with the geography of Judea and Samaria. Thus turning them into a fake documentation of the current “Settlement Enterprise” in the occupied territories. The politically correct is dead, all is allowed, fake news or not, the images are convincing and the landscapes are transported from their original time and place to another context elsewhere.

Space #2
The door of the wooden hut leads to the second space where a large-scale (2.5X10 meter) is installed. The background of the work is taken from an Austrian motor company advertisement. Originally presented on a billboard it was part of a tourism festival in Berlin, held in April 2019. The image depicts a hill, with a small wall at the foot of it. The hills in the image are reminiscent of the Israeli-Palestinian, Judea and Samaria hills. These hills are green in the winter and similarly to the billboard landscape image, have “The Separation Wall” at the foot of them.

In continuation to the "Redemption" series, also in this work I appropriated the original landscape from an unrelated image and associated it with the geography of Judea and Samaria.
Part of the appropriation of the Austrian landscape image was in adding strips of masking-tape to broaden the wall, thereby transforming it and convincing the viewer they are looking at the much larger Israeli-Palestinian wall. “The Separation Wall” is part of the Israeli landscape and can be seen clearly from far in the sky above. It is an integral part of local history, an additional layer in the political sequence throughout time that fuels the idea of ‘sacrifice’ or ‘victim’ in the local ethos. Surrounded by the work, the viewer can sense the power of “The Separation Wall” which denotes the strength of a human act within the natural landscape.

The Sacred Space: “Ha-Sair” cult space:
The third cult space is constructed of three elements: the horn, golden stones and a golden throwing-wall.
Sacred of them all is the fourth cult space, where the mask and the offering-bowl are placed.
In order to participate in the ceremony and to fulfill “Ha-Sair” cult, the viewer is required to perform a series of actions. First is to put a donatin in the horn, second is throwing a Talisman stone at the golden wall. As the stone hit the wall and breaks one need to collect the amulet hidden within the stone. Finally, presenting an offering (a stone fragment) to mask to release the blessing the amulet contains.
The sequence of actions of the worship ceremony of “Ha-Sair”, the objects used in the ceremony, and the colors (gold and red), were inspired by diverse religious traditions. As a whole it resembles traditional artistic and architectural forms as are customary in various religions.

The Horn: The decorated horn object serves as a charity container. It follows a tradition common in many religions, of placing donation containers in places of worship. At the end of the exhibition, the donations were given to “the hottest place in hell” – a news web-magazine that support principles of democracy, equality and social justice. A place for explorative Journalism, free of fear, who is not concerned to express a position

The golden wall and the act of stone-throwing: One of the commandments of Islam takes place on the pilgrimage to the town Mina, where a stone-throwing ceremony is held. Pilgrims throw seven stones at each of the three inner walls of the mosque. This is the last ceremony before the beginning of "Festival of the Sacrifice" - "Eid al-Adha". The stone-throwing cult is a metaphorical reconstruction of Abraham fighting and stoning Satan, when he tried to prevent Abraham to give his own son as a sacrifice to God.
The physical action of stone-throwing is performed in a variety of ways such as stoning, throwing or hurling (as either a religious act or a protest act). In my work, the act of stone-throwing denotes the release from the “cult of sacrifices” as a symbolic opposition to the divine "demand" for sacrifices and scapegoats. Throwing stones at the installation’s golden wall is an act of protest and detachment which is similar to Abraham’s protest of shattering deities at ancient “Ur Kasdim” to provoke the monotheistic belief instead of in Paganism. It expresses the metaphorical killing of a God (in the form of traditions, conceptions and narratives) thus emptying the world from death rituals, and calling for a proactive attitude towards the creation and worship of life. Abraham is the herald of faith in one God and founding father for the three monotheistic religions, very much in Judaism and Islam.

The golden clay amulet stones: Within the stones an amulet is hidden - a red thread with a pendant. The stones are designed to be shattered against the golden wall. The amulets are blessings for the ritual participants, inspired by the religious traditional custom of tying a red thread around the wrist for luck or protection.

The mask and the offering-bowl: Similar to the “golden calf” statue which was created out of jewelry, The mask is made of jewelry collected from women across Berlin. The red thread and small stones on the mask are reference to the Jewish "Sair La-Azazel” (“scapegoat”) tradition based on an event that occurred during the Day of Atonement (“Yom Kippur”) and was manifested during the temple era (832 BC – 136 AC). Traditionally in those days, on the Day of Atonement, the priests sacrificed two young goats. The first goat was sacrificed in the temple by an altar, while the other goat was taken to the desert to be sacrificed to atone for the terrible sins of the people of Isreal. According to tradition, before the goat was thrown to its untimely death from Azazel mountain, a crimson thread was tied to its horns. If, after its death, the thread became white, the sins of the Israeli people would be forgiven.
Placing a stone-fragment in the offering-bowl at the foot of the mask, enclosure “Ha-Sair” ceremony. Now, the participant has an amulet and a blessing for a long and quality life. 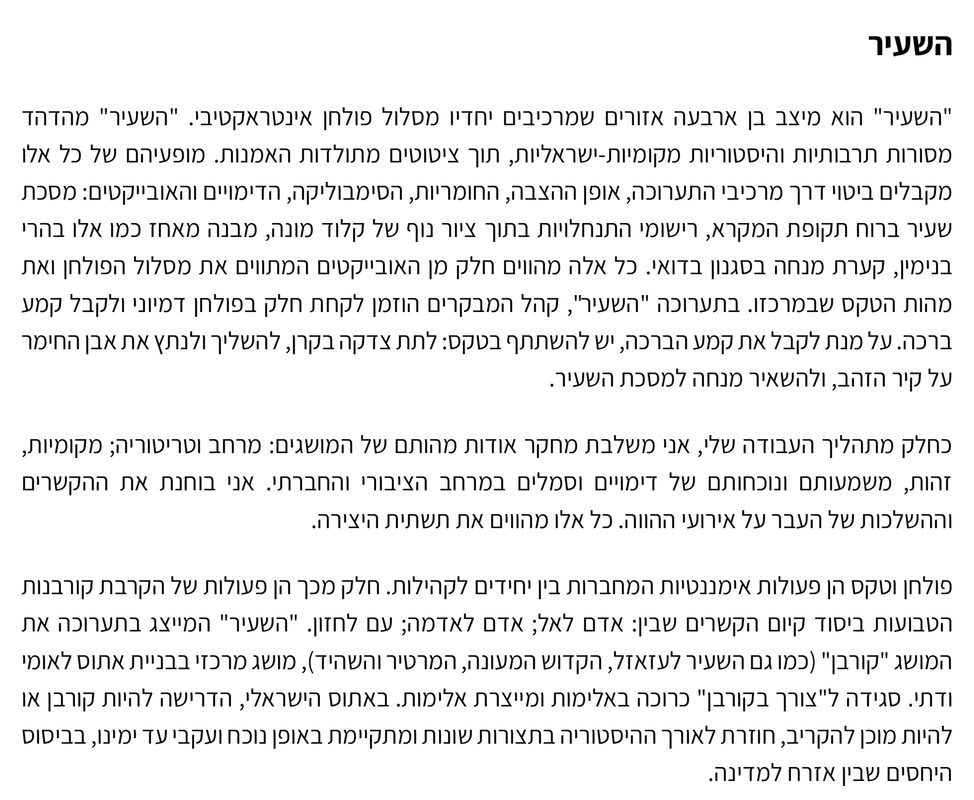 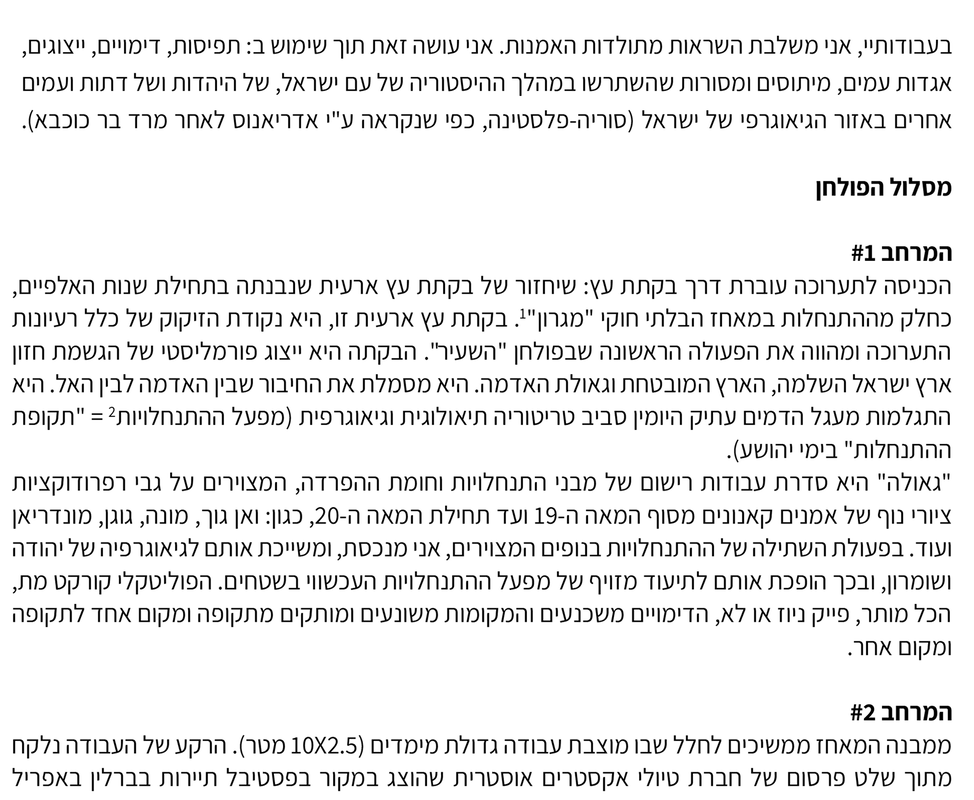 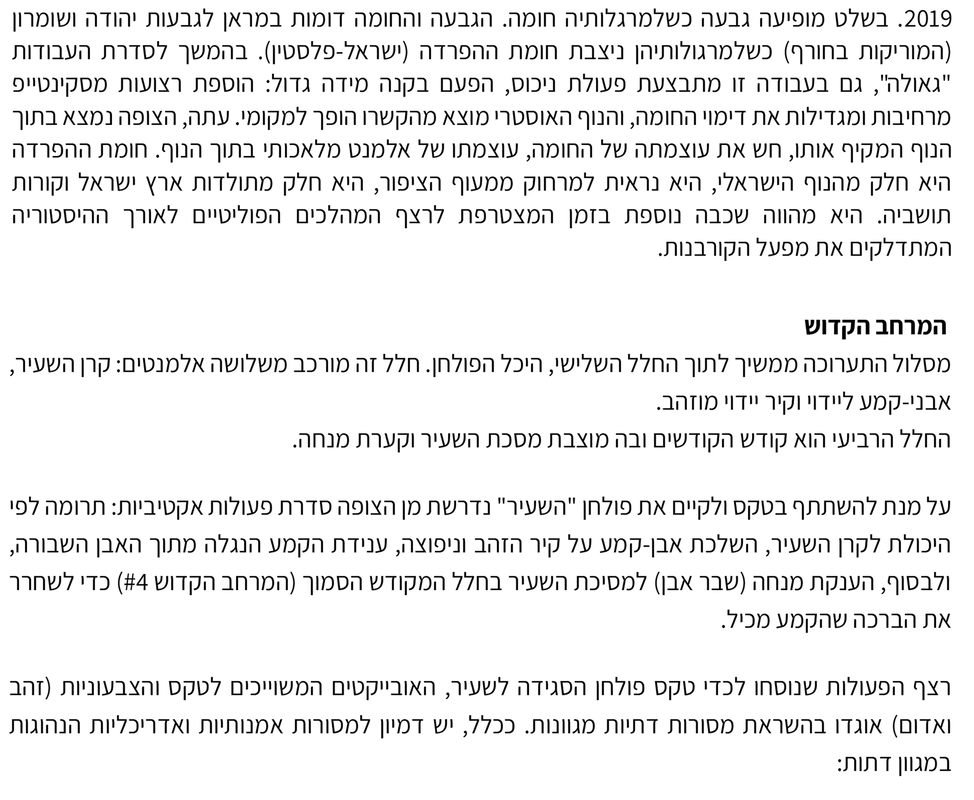 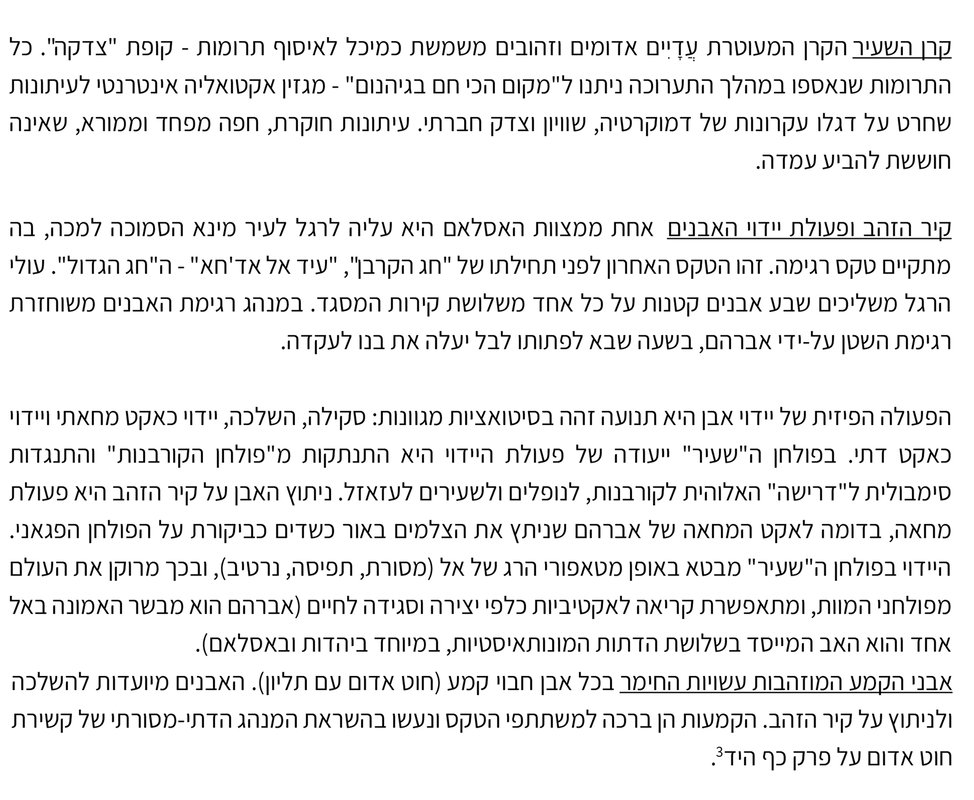 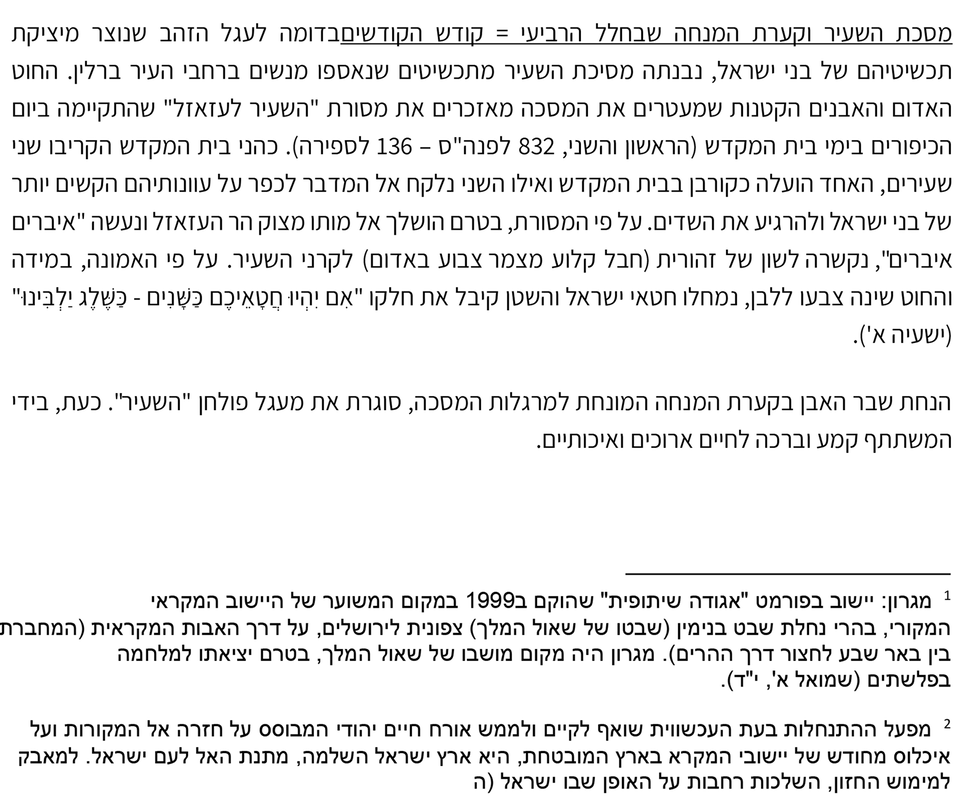